skip to main | skip to sidebar

Tuesday Poem: published in Kalliope in 1986 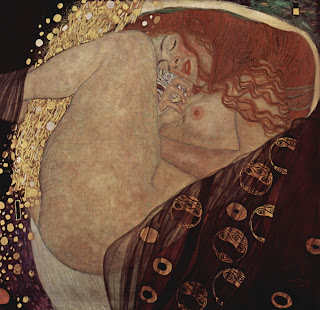 might as well be
thick white fog
clinging like sweat
to everything,
burning off
as soon as the sun comes up,

or a ten second
golden waterfall,
white hot with rapturous light,
and dry as a narrow stream bed;

for all its permanence

why not roll in the shallows
with a cold eyed swan
whose midnight caress
leaves you all by yourself
with a bruise of a memory
as morning pours over
the stony face of Olympus?

Tuesday Poem: Published by Caprice in 1992 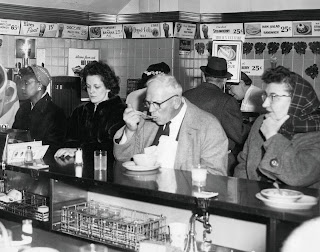 a man sits watching the waitresses work,
his cigarette smoke spelling out
retired and regular over his head.

Every once in awhile he lifts some
apple pie to his mouth in slow motion,
and regular changes to rapture.

You know he comes here often. You watch him
smile and nod to the sweet faced waitress,
wide as two people, who carries her breasts
like twin babies, swaddled tight in the navy
blue uniform, and so tenderly, as she
waddles past him with empty plates.

His smoke draws a heart in the air, and you agree.
Clearly she’s the pulse beat here,
the cook, dishwasher, girl who covers two stations
so the rest of them can go on their breaks.

You see a heavy woman with sore feet,
inching along behind the counter,
as if she were walking on hot coals,
trying her best to draw energy from the pain,
and unaware that she’s being watched
by this man in need of ritual,
this man with too much time on his hands,
this man without much reason to sacrifice.

So he comes here, to sit at this altar,
his gaze fierce and warm as a votive light,
burning for his Madonna of Tuna Melts.
You can almost touch his reverence,
circumscribed as it is in soft white smoke.
It lights up the empty glasses;
it glazes the doughnuts.
The hot dogs glisten
as they turn in their silver beds. 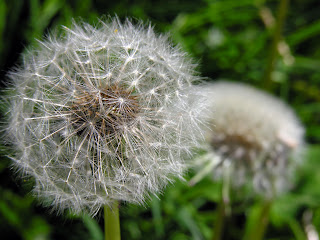 was the metaphor,
there all along at our feet,
their small petaled heads
poking out of the grass
like yellow lights
that say: Slow down.
Stop, and think awhile.
Look at them all,
how they lean for the sun
just like us.

If they're lucky, I thought,
they do their sweet time unmolested,
are never subjected to the fork-tongued weeder,
the blade of the mower, the poisons
that leave you twisted and dying
in the service of civilization.

Here is a white spirit,
my daughter said to me. It was evening
and she was handing me one, old and
fragile; it curled in my palm.
Don't let it blow away just yet, she whispered.
Let's make it last as long as we can.
Posted by Eileen D. Moeller at 10:29 AM 1 comment: Links to this post 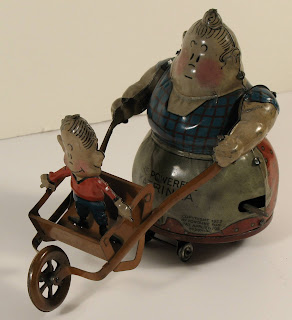